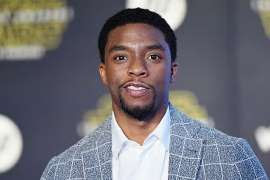 Boseman was diagnosed with colon cancer in 2016, his family said in a statement.

"A true fighter, Chadwick persevered through it all, and brought you many of the films you have come to love so much," his family said in the statement. "From Marshall to Da 5 Bloods, August Wilson's Ma Rainey's Black Bottom and several more- all were filmed during and between countless surgeries and chemotherapy. It was the honor of his career to bring King T'Challa to life in Black Panther."

Before his star-making turn in "Black Panther," Boseman played real-life historical Black icons Jackie Robinson in "42," James Brown in "Get on Up" and Thurgood Marshall in "Marshall."

He made his debut as T'Challa/Black Panther in 2016's "Captain America: Civil War." A standalone spin-off, "Black Panther," followed in February 2018, followed by  "Avengers: Infinity War" in April 2018. His last big-screen appearance as Black Panther was in 2019's "Avengers: End Game."