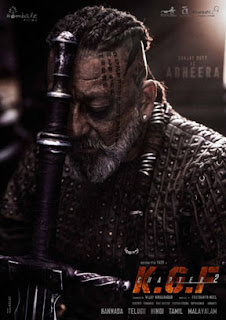 Bollywood actor Sanjay Dutt starrer upcoming cinema KGF CHAPTER 2 unveiled the first look poster of his character ‘Adheera’ as a treat to his fans on the occasion of the actor’s 61st birthday.

Chapter 1 ended with the death of Garuda, which will now in Chapter 2 will bring Adheera into frame. Chapter 2 will revolve around the power struggle between Yash aka Rocky and Sanjay Dutt aka Adheera.