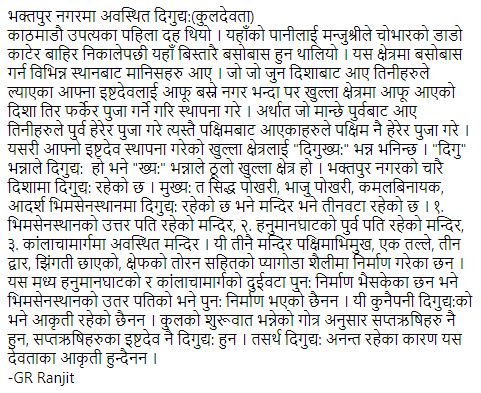 Kathmandu valley was ten before. After Manjushree cuts out the hill of Chobhar, it started to settle here slowly. People came from different places to reside in this area. Everyone who came from the direction they brought their Gods to worship in the open area instead of the city they live in. That is, the people who came from the east worshiped by looking at the east, the same way those who came from the side worshiped by looking at the side. In this way, the open area where your God is established is called ′′ Digukhya :" ′′ Digu ′′ means Digudya: If yes, ′′ Khya :" is a big open area. Digudya is in all the directions of Bhaktapur city. Main: There are three temples in Siddha Pokhari, Bhaju Pokhari, Kamalbinayak, Adarsh Bhimsensthan. The temple where the north husband of Bhimsensthan, The temple located at the former husband of Hanumanghat, The temple located at Kanlachamarg. These three temples have been built in a pagoda style with one floor, three gates, flirting, khetf's toran. In the middle of Hanumanghat and Kanlachamarg two have been rebuilt and the north husband of Bhimsensthan has not been rebuilt. None of these Digudhya: who is the figure. According to the clan of the people who say the beginning of the family, the sapta sages are the only God of the sapta sages are Digudya. Hence Digudya: This god doesn't have the image of this god because it is infinite.
-GR Ranjit