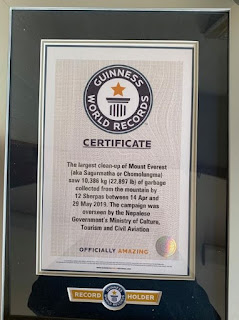 The Guinness World Records has announced that Nepal set a world record by successfully conducting an over a month-long cleaning campaign on the world’s highest mountain.

According to Meera Acharya, spokesperson at the Department of Tourism under the Ministry of Culture, Tourism and Civil Aviation, the clean-up drive has been recognized by the GWR.

The GWR certifies the largest clean-up drive of Mount Everest.

The mega Everest (Chomolungma) clean-up drive was conducted in the last spring season in coordination with the government and non-government agencies for the first time in the history of Everest climbing.

“The largest clean-up of Mt Everest saw 10,386 kg of garbage collection from the mountain by 12 Sherpas between 14 April to 29 May 2019,” the GWR certificate reads.

An initiative led by the Ministry of Culture, Tourism and Civil Aviation, trained Sherpa climbers  including icefall doctors mobilised by Sagarmatha Pollution Control Committee, collected approximately 5,700 kilograms (12,560 pounds) of the total litter came from Basecamp and nearby settlements, while the remainder was picked up from the high camps (I to IV) and along the old Khumbu Icefall route.

Of the total trash collected, 5,049 kg (11,131 lb) were recycled (including glass, plastic bottles and aluminium cans), but the remaining non-recyclable material had to be incinerated or sent to landfill.

“The most common types of litter retrieved were wrappers, themo-insulation linings and broken glass,” Acharya informed.

During the campaign locally managed by Pasang Lhamu Rural Municipality, four bodies of climbers who had died while climbing Mt Everest were also retrieved.

The Ministry of Forests and Environment, the Department of National Parks and Wildlife Conservation, the Nepali Army, the Nepal
Mountaineering Association and the Nepal Tourism Board also assisted the 45-day-long cleaning campaign.

According to DoT, the government spent Rs 27 million rupees to run the campaign.